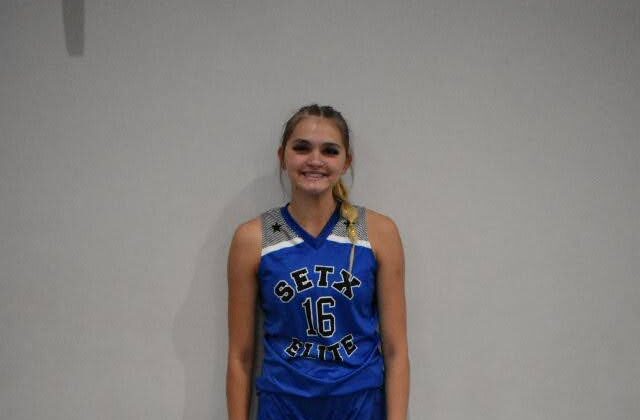 ASA had a couple of athletic twins, Principles First had a variety of up-and-comers and HTX also has some I’ll be adding to the New Faces article. I already dropped the “bigs” from ASA, SETX, and HTX, you can revisit what I said by clicking on this link

Reynolds continues to WRAP everything up in a nice package as she shows how effective she is at running the 1 for her squad. I’ve always been impressed by her understanding of how to control the tempo as well as being “vocal on the court”. Poised under pressure, she set her teammates up for easy baskets, yeah that court vision is nice and her unselfishness and being able to show the pass first PG side was nice yet she also showed she could take things over if needed

Stephenson already has sent some messages in “track and field” and has been to the state finals already yet she’s long and athletic, with some pretty impressive timing. Timing not just to block, alter or defect shots but to grab passes out of the air, I enjoyed that. She not only went and got errant passes, but she also goes after everything off the rim and can score on putbacks. Well she also scores around the basket, I’ve mentioned the hands but she also has the footwork and her impressive strides to get to the basket and finish are also nice, yes she defends well

Mlodzianowski does something extremely well and that is to get the defender off balance so she can attack the basket. The slight HEZ is one way, the head-fake is another yet she also showed a slight stutta, that’s stutter-step, yall probably call it something else in this era but when she dropped the EURO, I just SMH. Nice pull-up jumper, played solid defense and she also did something I stress for players to do over and over and that’s “played the passing lane

Warden continues to show me how much she has added to her game. I mentioned in an earlier article that she has one of the best JUMPERS in the state, all classes yet her ability to create her shot under pressure speaks volumes. I love the pull-up on the baseline, especially because that’s a hard shot to knock down, especially with a hand in your face however she gets to whatever spot along the baseline to get it off. She also can rebound and go C2C, that’s coast to coast, and drop the stop and pop but her continuously attacking the basket, and finishing with either hand gives her offensive options

Phoenix is one of the top incoming freshman guards I knew nothing about yet her SWB, that’s “speed with ball” JUST DID IT for me off the top, and so did her “threading the needle” meaning she might passes in traffic look easy. Her demeanor is ahead of her years, I’ll add even more because she gets a double dose on New Faces, coming up