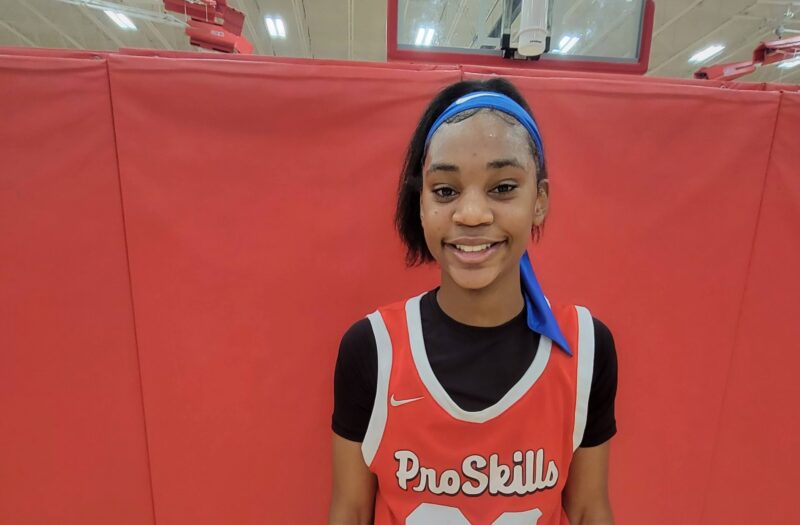 I emphasize over and over that, I have to see things for myself because of the agendas as well as I see things differently regarding players SIMply because I know where the bar has been set after doing this for over a SCORE, that’s 20 years, and I don’t just base my opinions on seeing how many points a player scores

My saying “it’s not what you do, it’s who you do it against” is so SIMple yet so misunderstood yet with the countless camps ranking players nationally because some attended, the abundance of opinions that often differ from mine, I consistently do what I’ve been doing and when I say a player is a #D1Lock, well I haven’t been wrong yet so here are some players that are going to be in the mix, I couple have already been LOCKED IN

Bailey left a lasting first impression a couple of years ago when I dropped the LOCK because first of all, she is “long and athletic” and that is the base, I say that over and over yet her intangibles are what sold me. She was playing up and her “poise under pressure” ” the way she reacted in certain situations” and just as important “she did things instinctively” so fast forward now, her first step is a problem for defenders, so is her body control yet what creates even more issues is the pull-up jumper, mid to long-range. I also enjoyed watching her play the passing lane and handling the ball in the open court under pressure

Hamilton was one of the best 3rd graders I have seen, she was also long and athletic yet her maturity was way ahead of her years, and that in itself got her locked as she joined a select few from that grade that has gone to the next level and beyond. She scores smoothly off the dribble, a deceptive first step sets everything up but her finishing after contact is definitely a huge plus. She creates her shot and drops the jumper with a hand in her face, yes the long ball is included, plus she rebounds and can go coast to coast afterward

Khawaja was locked a couple of years ago when I caught her with another squad, I’m not a novice so again, I know what I’m looking at and her mannerisms on the court caught my eye initially and when I observed the roster and saw she was a 5th grader, both eyes were opened wide. Her jumper is smooth and consistent, she can score from a variety of spots from the outside yet she also does a good job attacking and dishing or just scoring, however, her court vision needs to be mentioned

Johnson gave me a glimpse of what’s coming, no she wasn’t locked in, I don’t even recall seeing her before however, she stands over “the magic number” and 75 inches ain’t no joke. She already has a college-ready frame, I liked her “hands and footwork” as well as her rebounding yet even more important is the fact that she wasn’t fazed by playing up against players her size heading to the next level. Love her upside, “oops upside the head”, as her power will create some issues