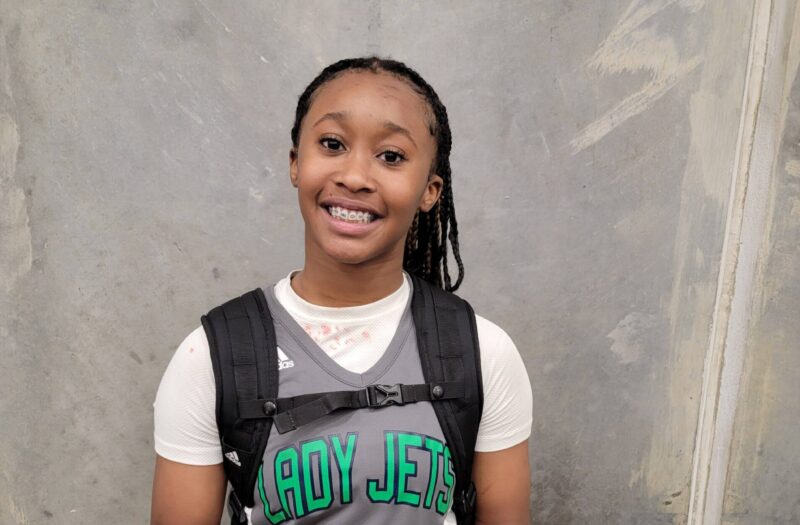 Okay, I finally had a chance to catch my breath and get some rest because this week has been SUPER, not just because of the talent, talent is everywhere, but because I had what I needed and that would be the rosters because one more time, the time wasted asking who someone is the time taken away from me seeing someone else.

Gunter didn’t want to take the picture because her tee had blood on it, so I assured her I’d edit it but I knew I was lying because it tells a story. I’m a storyteller, and I deal in fact not FICTION, and she proved she was a warrior because no matter how many times she was knocked down, she would not be knocked out and kept coming back. The mid to long-range, ye, the off the dribble, yes but her OTB defense, on the ball, places her on yet another level

Abii also falls in that “another level” because her progression from when I first saw her to now has future WNBA as a real possibility. I don’t just say or type things that sound cute, I keep it real, and watching her change h hands in mid-air, both on the short jumper as well as in the air around the rim is just something I don’t see a lot of nowadays but her finishes after contact are just amazing. She battles for everything off the rim and on the floor, she’s also a solid defeder

Desouze is a HEADY PG that does something that places her on a different level and that’s “she makes those around her better and by that, her court vision ahead of her years as she is threading the needle like a master seamstress, GOOGLE IT, yet her pull-up jumper ain’t nothing to be played with as she dropped the stop and POP so many times I almost stopped and got a  SODA yet her ball handling under pressure was impressive

Byles is listed as a SG and if you were on hand to see her dropping the long ball in the clutch, you would not question the listing but again, she does more than drop three pointers in the clutch. She’s long and athletic, that is THE BASE, attacks off the dribble, scores after contact, and plays the passing lane but she also can handle thy ball after a steal as well as the rebound, she does on both ends and go the length of the court. Very good timing to block, alter and (or) defelct

Pruitt  elevates with ease to score around the basket yet watching her SNAG rebounds, on both ends and handle the ball in the open court is also something to see because she sees the floor, she can score off the dribble as well as drop the jumper all of this just from playing the passing lane or rebounding but let me add, she too is “long and athletic” ad watching her make the offensive player change their shot or change their mind about challenging her had me smiling