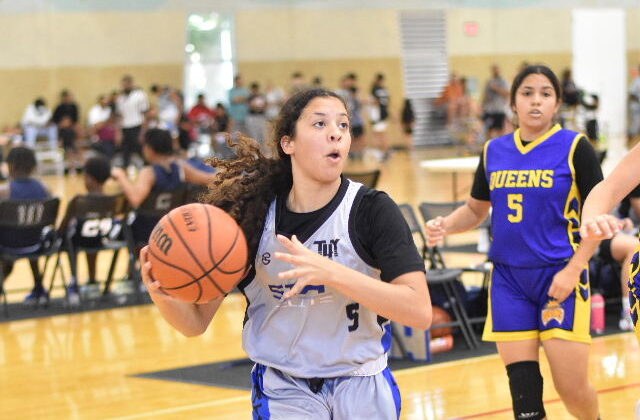 Richard Perales, director of Premier Athletics definitely got the ball rolling early for me for not only lining up the schedule so it was SIMple for me to cover a lot of girls teams but assuring me my Battle In the Alamo T-Shirt would ft, yes I am dropping more pounds but let me drop a quick group ready to enter high school from the 8th Grade Division on opening day, I’ll have about 6 or 7 articles on here as well as my own site so stay tuned and be ready, this group was at Mission Concepcion Sports Park

Burleson is “long and athletic” and that will always be the base for certain profiles I break down yet, more importantly, college coaches also love that but she plays the passing lane, scores off the dribble, and finished strongly after the lick. She also showed the pull-up jumper. and watching her elevate to get it off while being defended was nice

Perkins created her shot very well under pressure yet even better, she knocked it down with a hand in her face. She also attacked the basket strongly and finished after contact, usually showing some impressive body control but watching her elevate off the ground for rebounds, on both ends, was another hit yet the hits kept coming, and when you factor in her upside …

Solis did something few players have done, not even a handful, and that’s fake ME out with her “look-offs” but her impressive moves attacking the basket were only part of her game. She handled the ball under pressure, she saw the floor and she showed the “stop and pop” jumper in transition, even more importantly, she wanted the ball down the stretch and showed she could get it done in clutch situations

Watkins is “long and athletic”, one more time, that is the BASE so what intangibles does she add. Playing the passing lane is always huge for me, as well as handling the ball and going coast to coast and finish but she also finishes in the set, the first step sets everything up and she can drop the jumper from multiple spots. She plays solid defense and has nice upside

Forbes would be in the running for “toughest player of the day”  as I play everything back in my head because of the numerous times she was knocked down while attacking off the dribble or scoring on putbacks. She rebounds against taller players, on both ends ad brought some heat playing defense yet her “mental toughness” coupled with her upside is solid