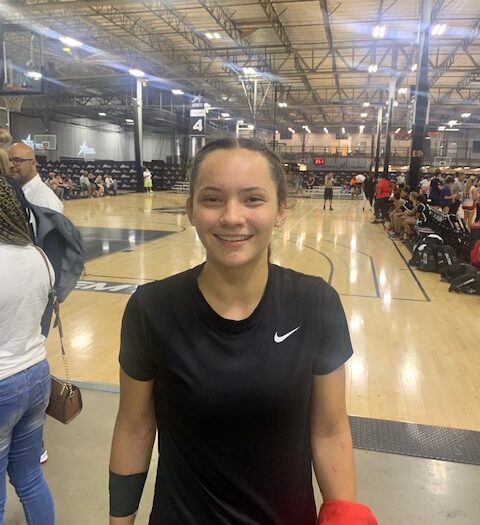 This weekend kicked off the July live period and for girls basketball, most events with CA teams participating were held out of state. But Sports Academy in Thousand Oaks, CA did play host to a local event, the End of Trail SoCal Showcase. The event was held from Sunday, July 10 to Tuesday, July 12 and featured teams from both Northern and Southern California as well as some from out of state. I was able to attend the event on Monday, July 11 and I focused on the CA teams. Here’s a look at some of the top point guards I saw.

Estrada is a solid point guard who is comfortable controlling the tempo of the game. She runs the offense well and is a pass first player. Dribbles under control in the halfcourt and does well against defensive pressure. She’s able to break down the defense and get into the lane where she can kick the ball out to open teammates. Takes advantage of scoring opportunities too. She can hit the little floater/runner in the lane and can shoot it too. Had a game-winner in the midrange in the game I saw.

In the game I saw, Tolentino was able to play both guard positions, but did well as a primary ball-handler making decisions. She’s very quick with the ball in her hands, she pushes the pace well in transition. Good off the dribble game, she hits defenders with a quick first step and gets to the rim. She’s a bit small, but she can finish through traffic in the lane. Defensively, she’s’ solid on ball; uses her quick hands to knock the ball free. Does a good job fighting for rebounds as a small guard.

Woo also stood out as a good pass first point guard. Comfortable running the offense in the halfcourt and getting teammates shots. She has a good slashing game and she looks to pass on her drives. Does a good job finding the open cutter along the baseline. A good ball-handler who can hit defenders with a little crossover. Consistent shooter from three-point range.

Nakaji can also play both guard positions but seems like a natural point guard. She keeps the ball moving in the halfcourt well. Looks to make the right read/pass before scoring. She’s a good shooter from three in catch and shoot situations with a quick release before the defense can close out. She can shoot off screens too. As the game went on, she showed a solid ability to get to the rim and finish over the defense. Defensively she does well denying the catch and on ball she makes the ball-handler pick up their dribble.