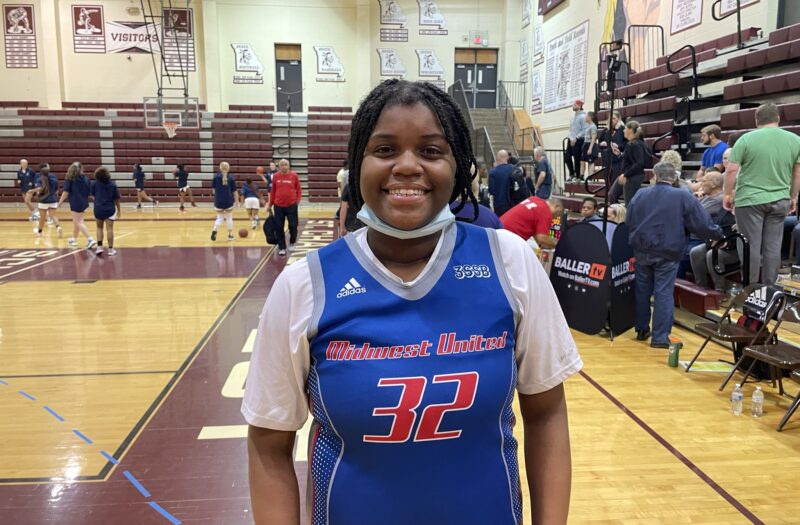 *Get 25 percent off your subscription by entering Earl25 in the coupon code area. Enjoy Prep Girls Hoops Missouri.

*The Prep Hoops Missouri Top 250 Expo will be held on September 24 in St. Louis. Be sure to register now. When you do, enter austinExpo2022 to receive a discount on your registration.

Prep Girls Hoops Missouri begins its class and positional breakdowns from the Run 4 the Roses Classic, which was held in Louisville, KY.  Here is look at some of the top Class of 2027 players from Missouri who caught my eye in Louisville.

Dasia Scott (Midwest United 3SSB 2024): The 6’0″ power forward was a force in helping to lead her team to the Gold Bracket championship of the 2024 Indigo Division. Playing three years up didn’t seem to bother her as she was able to showcase her variety of moves in the low post as well as her ability to impact the game at both ends of the court. In the championship game, she scored a game-high 20 points while also rebounding and blocking a number of shots. She plays with a good blend of power and finesse around the basket to go along with a nice shooting touch.

Laila Boylan (Della Lamb Adidas 2026): A 5’9″ combo guard who is playing up a year and she did a nice job of impacting the game on offense in several areas. She is a very confident ball handler and playmaker who can make pinpoint passes with both hands while on the move. She is also a capable threat from 3-point range.

Sophia Benke (Knights Basketball Academy 2027): A 5’6″ guard who was constantly on the move and attacking the basket at every opportunity. She has good speed in the open court, but she also has shifty moves and nice handles to slice into the lane on the drive. She can hit the short jumper or the runner on the move. She also does a good job of finding the seams in the opposing team’s zone defense.

Destiny Manyawu (Della Lamb Adidas Black): A 6’0″ forward who has length and athleticism and she’s oozing with a lot of potential. One one play, she challenged a shot near the 3-point line and she was able to get back and grab the rebound under the basket. That was very impressive. She gets out of her area to rebound and she will run the court and block shots.

Fallon Jones (Knights Basketball Academy 2027): A 5’10 forward who has good length and mobility, which she displays with her ability to run the court in transition. She catches the ball well on the rim and finishes well. She is also capable of grabbing the rebound and leading the fast break on her own. She is also a capable shot blocker on the defensive end.

Jayce Green (Lady Brad Beal Elite 2027): A versatile 5’7″ guard who is a good ball handler that is capable of beating double teams off the dribble to score well in the lane. She can also operate from the high post very effectively as she can turn and face her defender very well. She can wheel and deal to the basket off the dribble or shoot the jumper with a nice touch. She has a high basketball IQ and she can make good decisions with the ball.

Leighana Shelton (Lady Brad Beal Elite): A 5’7″ combo guard who has smooth handles and can operate effectively in an iso situation where she can break a defender down. She is an unselfish player who will kick it out to an open teammate off of her dribble penetration and she can also knock down the Corner 3-pointer.

Sky Schueler (Knights Basketball Academy 2027): A 5’3″ point guard who has excellent speed and she uses it to push the tempo at every opportunity. She has an effective pull up jumper from the mid range and she also makes her free throws. Her speed is also an asset on the defensive end on her team’s full court pressure.