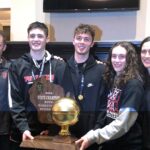 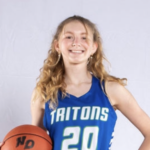 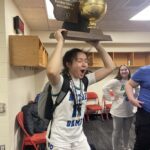 I usually don’t talk about individual games, but the Pewaukee, Notre Dame game met the bar for its own article. In a rematch of last season’s D2 state title game, both teams opened their season last night. Although Illinois State commit Trista Fayta Trista Fayta 5'8" | PG Green Bay Notre Dame | 2024 State WI didn’t play, it didn’t change the mentality of both teams in that game. Each team had their opportunities to seal a win late in the second half, but in the end, Pewaukee avenged their state title loss by a point after they held the Tritons’ last effort from a baseline out of bounds. Even though Fayta didn’t play last night, I don’t know how you’d find as many talented kids on the floor in any game, so let’s talk about them.

Amy drew most of the Tritons’ defense whenever she touched the ball, and with good reason. Terrian took the state tournament by storm last season after scoring 30 against a talented Reedsburg team. Last night we got to see her take more control of the offense with the ball in her hands, taking those reigns from now-Northern Michigan guard Sarah Newcomer. The final thing I want to highlight about Amy is how she took the responsibility of guarding Gracie Grzesk Gracie Grzesk 6'0" | SF Green Bay Notre Dame | 2024 State WI in the post. She gave up a few buckets inside, but she battled every time down the floor. That alone gives you a glimpse into who she is as a player.

Anna began the game by recording an and-one, and that’s not something she would’ve done last year. She played her role at an elite level last year, but now she has more responsibility. Terrian looked aggressive and confident with the ball and was one of the most vocal kids on the floor. You could hear her directing her team whenever she got the chance. In the grand scheme of things, people can overlook her because of how good her sister is, but she’s the one, in my opinion, who raised this team’s ceiling the most this season.

Only a freshman, Janowski made a name for herself last night. The one thing that kept her from being the most dominant player on the floor was foul trouble. Notre Dame didn’t have an answer for anything Janowski brought to the floor, and her defense on the perimeter was elite. She’s strong, moves her feet, has active hands, and pushes people back to the half-court line. Most of her fouls came from guarding Grzesk in the post, and she’s not going to defend anyone that good in the post the rest of the regular season. If you don’t know who Giselle Janowski

Johnson came off the bench but made the play of the game late. She created a live ball turnover late that led to her getting a one on none fastbreak to give her team a one-point lead that would give the Pirates a 68-67 lead they wouldn’t relinquish. That play Johnson made was one the freshman had no business making. She left her assignment and punched the ball out of the ballhandler’s hands, and it all happened in about two seconds. She missed a handful of layups, but Johnson brought elite pressure to the ball all game long.

If you’re looking for a stretch outside of the final minutes that won Pewaukee the game, look no further than Ava Westerman’s last minutes in the first half. The Tritons pressured the entire floor and dared the Pirates to pass over their defense. When the ball got across half court, it became a scramble drill for the Tritons, and they were willing to help off Ava Westerman and leave her open. However, Westerman punished the Tritons, burying three 3-pointers late in the first half. Every point matters, and the lone senior in the starting lineup made plays when she needed to.

The Wisconsin commit is the most proficient player in the state, with her back to the basket. The Pirates didn’t have the size or length to deal with her all night. Grzesk was the main reason that the Pirates found themselves in foul trouble after having to send help every time she touched the ball within 10 feet of the basket. The future Badger wasn’t fazed and made the right decision with the ball almost every time.

With Fayta out, Musial received lead guard duties. Even though she’s not a natural point guard, she did as well as anyone could’ve hoped against one of the most aggressive defensive units in the state. If you told anyone on the Tritons’ staff that the Pirates would throw pressure at Musial all game, and they’d a chance to win with under five seconds to play, they’d take that 100 out of 100 times. Musial showed more athleticism than I knew she had and made plays off the dribble when she needed to. Although I wouldn’t consider her a point guard, she showed she could do it in a pinch against elite competition, which is a good thing in the long run for Musial individually and Notre Dame as a team.

The moment Whitehouse got her fourth foul, things got to be challenging for the Tritons defensively. The junior was the most aggressive kid on the floor and got to the basket at will, especially in the first half. The Triton was the best creator with the ball and played elite defense. Whitehouse was the one-person full-court press for long stretches and even earned a steal late in the first half while being the only Triton in the frontcourt defensively.

You could tell that Barington was one of the few who wasn’t too handsy and played her role. In a game where multiple kids fouled out or had four fouls, Barington played most of the game and didn’t foul until late in the second half. When teams helped off of her, she floated back to the 3-point line and knocked a few down, and defensively, she moved her feet and stayed in front of extremley athletic wings. She kept things simple and started her season well.